Malignant Lesions of Esophagus: A Review

How to cite this article Mathialagan J, Krishnamurthy B, Srinivasan S. Malignant Lesions of Esophagus: A Review. Ann SBV 2019;8(1):5–8.

Conflict of interest: None

Background: Esophageal malignancy is the fourth leading cause of cancer-related death in India. The most common malignancy of esophagus is squamous cell carcinoma (SCC) followed by adenocarcinoma. But recently, an increase in incidence of adenocarcinoma owing to lifestyle modification has been observed. Other rarer varieties such as granular cell tumor (GCT) and carcinoid tumors are also reported more frequently in the recent literatures.

Review of literature: Certain types of esophageal malignancies on evaluation were characteristically localized to specific areas. For example, SCC is more common in upper and middle esophagus owing to the nature of the lining epithelium, adenocarcinoma is prevalent in lower esophagus due to Barrett’s metaplasia, and neuroendocrine tumors are frequently encountered in the lower end of esophagus due to the presence of endocrine cells. But rarer types of epithelial and mesenchymal lesions cannot be localized and diagnosed based on site alone. They require histopathological evaluation for confirmatory diagnosis. In the present review, we discuss the different types of malignancies encountered in esophagus, their incidence, histopathological findings, and theranostic value.

Conclusion: The incidence of esophageal malignancy has shown an upward trend in the recent years. A thorough knowledge on the varieties of lesions possible in esophagus helps in providing an accurate diagnosis, which ultimately dictates the prognosis of the patient.

Esophageal malignancy is the sixth cause of cancer-related death in the world and the fourth leading cause of cancer-related death in India.1 The incidence is higher in males compared to females. Smoking, tobacco usage, alcohol consumption, and HPV infections are some of the predisposing factors. The well-established risk factor for esophageal malignancy is Barrett’s esophagus.2 The most common malignancy is squamous cell carcinoma (SCC) followed by adenocarcinoma. But recent studies have shown an increase in incidence of adenocarcinoma owing to lifestyle modification. Other rarer varieties such as granular cell tumor (GCT) and carcinoid tumors are also reported more frequently in the recent literatures. Due to nonspecific clinical symptoms such as dysphagia, these lesions are often diagnosed in late stage and so have poor prognosis.3 The various types of esophageal malignant lesions and their histopathological findings are discussed in this review article.

They are the common neoplasm of the upper half of esophagus accounting for about 80%. Patient clinically presents with dysphagia, odynophagia, and obstruction. Endoscopic screening shows a variety of findings ranging from stricture to expansive growth, which explains the gradual alteration of diet from solid to liquid foods. Microscopically, dyskeratotic squamous cell with varying degree of keratin pearl formation with desmoplastic stromal reaction and nuclear polymorphism is seen (Fig. 1).4

It is a variant of SCC and has association with Candida sp. that has been observed in many cases.5 Grossly, it is a warty, exophytic, and cauliflower-like growth found in the esophagus. Microscopically, the tumor shows well-differentiated, keratinized squamous epithelium, and minimal cytological atypia with characteristic pushing margins. They are slow growing and locally invasive with low metastasizing potential.6 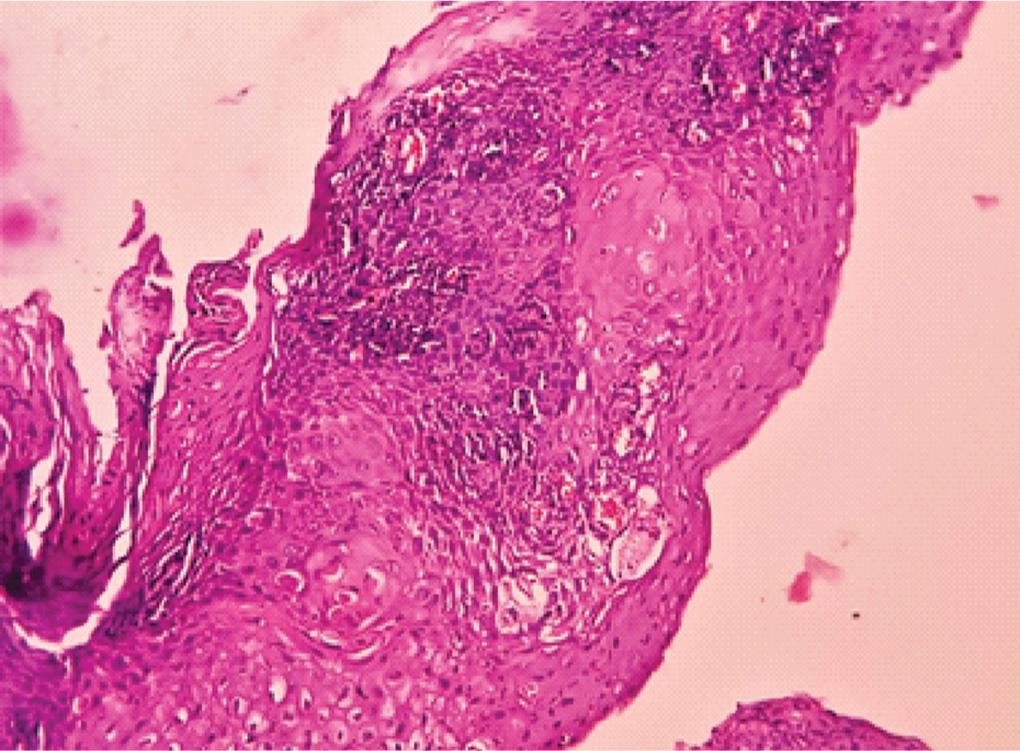 It is a unique variant of SCC similar to its component in the upper aerodigestive tract. Histologically, the tumor shows closely packed cells showing hyperchromatic nuclei and scant basophilic cytoplasm with solid growth pattern, gland-like spaces, and foci of comedo necrosis. Basaloid SCCs are sometimes associated with adenoid cystic carcinoma-like pattern but can be distinguished based on histomorphology and immunoreactivity. Though the proliferative activity of basaloid SCC is higher than typical SCC, the prognosis usually does not differ from that of the ordinary esophageal SCC.7

They are basically SCC showing variation with sarcomatoid spindle cellular component. Also known as SCC with a spindle cell component, pseudosarcomatous SCC, carcinosarcoma, and polypoid carcinoma. Grossly shows a polypoidal growth pattern. Microscopically, the tumor shows spindle cells with pleomorphic potential. So all the areas have to be scanned to look out for skeletal muscle cells, cartilage, and bone.8

Usually develops in the background of Barrett’s esophagus and long-standing gastroesophageal reflux disease (GERD). Tobacco use, obesity, consumption of spicy food, hot beverages, alcohol, and previous radiation therapy are some of the risk factors for the progression to Barrett’s esophagus. They are commonly localized in the distal third of the esophagus. Endoscopic appearance ranges from initial flat or raised patches to advanced exophytic masses with ulceration. Microscopic findings are glandular arrangement of tumor cells at varying degrees and most cases will show an adjacent area of Barrett’s esophagus (Fig. 2).9

The adenosquamous carcinoma of the esophagus is an unusual and rare type of malignant neoplasm of esophagus and as the name suggests is composed of both squamous and adenocarcinoma components. Its incidence is about 0.74% of all esophageal cancers.10 Grossly ulceroinfiltrative growth with focal mucin plugs may be seen. Japanese Society for Esophageal Disease (JSED) criterion states that at least 20% each of adenocarcinoma and SCC components in the tumor qualifies to be termed as adenosquamous carcinoma.11

This infrequent neoplasm though common in salivary glands is also encountered in the esophagus. The incidence is 0.04–0.16% with male preponderance and peaks around the 6th decade of life. On examination, the tumor was lined by normal mucosa at the early stage, and in later stages, ulceration was noticed indicating the tumor progression.13 The tumor is composed of epithelial cells arranged in tubular and cribriform patterns. Ducts, tubules, and also cylindromatous microscopic spaces are seen and the lumen is filled with eosinophilic mucoid material. The impact of chemotherapy is not clear. The literature shows three reported cases with good clinical courses in the absence of metastasis and treated with radical excision.14 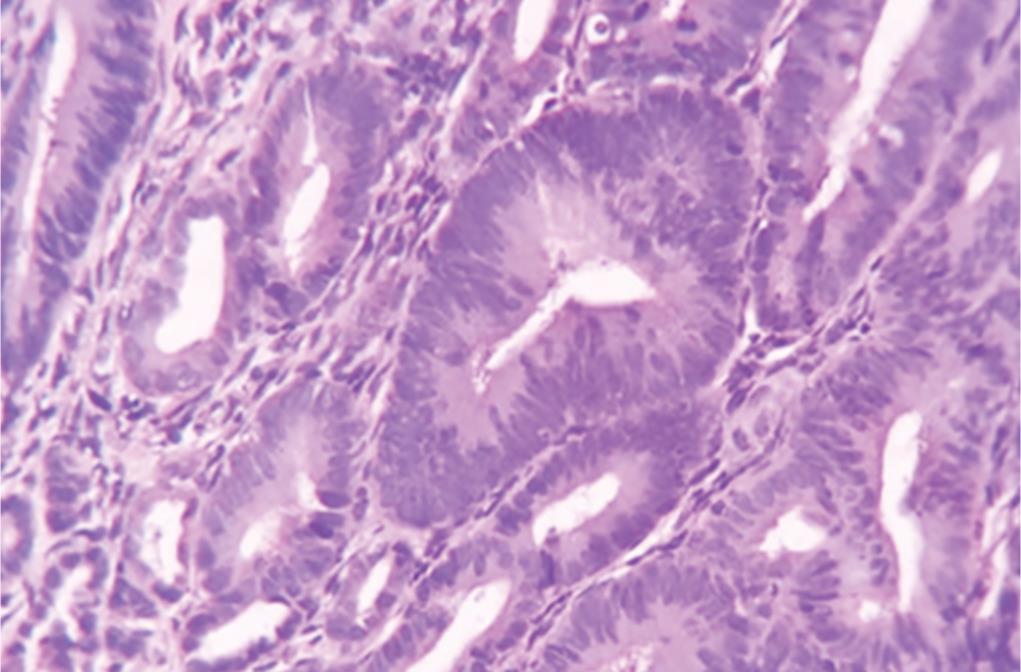 They are rare and aggressive tumor with poor prognosis accounting for 0.05–4% of all esophageal malignancies. They have similar histological, clinical, and immunohistochemical features to its counterpart occurring in the lung. On examination, the cells are small showing scanty cytoplasm and the arrangement is in solid sheets and nests. The presence of argyrophylic granules is verified by Grimelius stain.15 Association with increased levels of serum calcitonin and ACTH have been documented in some cases.16

This rare histological variant of esophageal carcinoma accounts for 0.15–4.5% incidence.17 Grossly, these tumors are exophytic with a pushing border. Histologic findings are malignant cells with syncytial pattern of arrangement with little intervening stroma between neoplastic cells and patchy tumor necrosis. Usually local recurrence with or without distant metastases within 12 months of esophagectomy is observed indicating poor prognosis.

The prevalence of esophageal neuroendocrine tumors (NETs) is about 1.3% with 4:1 male:female ratio. Very rarely patient presents with typical carcinoid symptoms. They commonly present with nonspecific dysphagia. Endoscopy shows esophageal carcinoids, usually a single lesion observed in lower third of esophagus.18 This is attributed to the concentration of the endocrine cells in the lower part. On microscopic examination, solid nests of tumor cells which stain positive for Grimelius stain and also neuron-specific enolase are seen. Esophageal carcinoids of size more than 1.0 cm with evidence of distant metastasis, and histologically, poorly differentiated are rapidly proceeding and associated with poor prognosis (Fig. 3).19 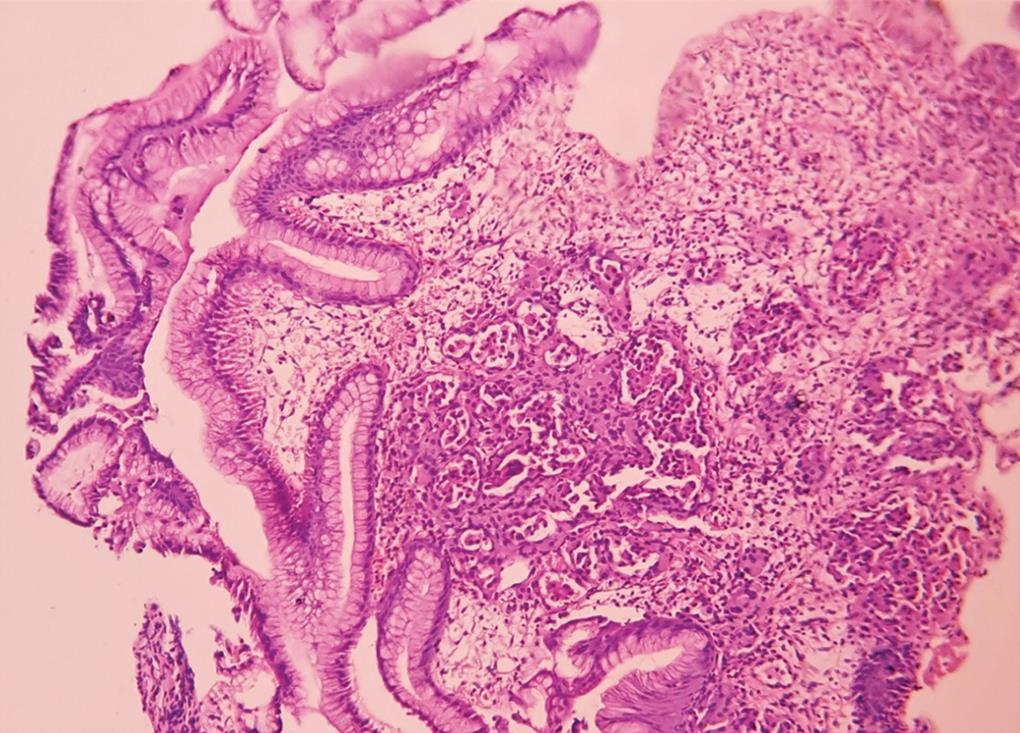 This benign lesion is the commonly encountered mesenchymal tumor of the esophagus. Male:female ratio is 2:1. The median age distribution is 30–35 years.20 They are mostly asymptomatic but dysphagia may be present. The pattern in endoscopy is similar to a submucosal neoplasm with a normal mucosa as firm, round, and tan lesion. Grossly, leiomyomas size varies from few millimeters to 10 cm. Histopathologically, the tumor shows bland spindle cells. The individual tumor cells show fibrillary, eosinophilic, and clumped cytoplasm. The treatment of choice is excision and no recurrence case has been reported in the literature.21

These rare tumors make up 0.4% of all benign neoplasms of gastrointestinal tract (GIT). They are mostly asymptomatic owing to their small size. Clinically, dysphagia, regurgitation, or epigastric pain develops when the lesion size is more than 4 cm.22 They can arise from the mucosal, submucosal, or muscularis layer. Endoscopy along with CT is required to locate and evaluate mediastinal involvement. Grossly, it appears yellow in color with smooth surface. On examination, mature adipocytes are seen with a prominent fibrous capsule. Surgical excision is the treatment of choice.

Gastrointestinal GCTs account for only 8% of all GCTs. Mostly, it is encountered in distal esophagus. Endoscopic features include sessile and white-to-grayish raised lesions with smooth surface.23 Microscopically, nests or sheets of polygonal malignant cells with round, small nuclei, and granular cytoplasm are seen. They are positive for S-100 and periodic acid Schiff (PAS). Based on endoscopic and endosonographic evaluation, the location and extent of the tumor are assessed. Endoscopic submucosal resection is the choice for smaller lesions, and larger lesions require conventional resection.24

It is the most common mesenchymal neoplasms of the gastrointestinal tract arising from the interstitial cells of Cajal. Esophageal gastrointestinal stromal tumor (GIST) is a very rare entity of GIST and represents %3C;1% of all cases.25 Endoscopically tumor may vary in size, and based on size and microscopic findings, they are subcategorized into benign, malignant, and lesions with uncertain malignant potential.26 Treatment options vary from submucosal resection to neoadjuvant/adjuvant chemotherapy.27

Leiomyosarcoma of the esophagus accounted for 0.2% of malignant esophageal tumors and are commonly encountered between the 6th and 8th decades.15 These slow-growing tumors with intact mucosa may grossly mimic benign lesions. On examination, cigar-shaped bizarre cells with areas of necrosis and atypical mitosis help in distinguishing from other aggressive tumors. Surgical resection is the treatment of choice.28

Sarcomas accounts for 0.2% of esophageal malignancies. Elderly people between the age group of 60–80 years are primarily affected. Few cases have been reported in distal esophagus. Establishing the presence of skeletal differentiation by the presence of characteristic cross-striations, electron microscopic evaluation, or immunohistochemistry (IHC) is required for the diagnosis. Treatment options include surgical resection with or without adjuvant therapy based on the size of lesion, level of invasion, and metastasis.29

They are uncommon malignant neoplasm of mesenchymal tissue that occurs in immunocompromised patients. Skin lesions are the usual presentations and visceral lesions are common in organ transplant recipients. Endoscopically, they appear as a mucosal lesion.30 Histologically, spindle cells with vascular slit formations and scattered PAS-positive globules are characteristic. The tumor cells are positive for CD31 and CD34.31

These rare malignant tumors account for 0.1–0.2% of all esophageal malignancies. In esophagus, they are commonly metastatic than primary.32 Primary melanomas on endoscopy are polypoidal, dark brown to black colored, and clinically aggressive lesions. Histolopathologically, pigmented malignant melanocytes in sheets seen. Surgical resection is the treatment of choice for localized lesions.33

These includes malignant lesion of the esophagus that arise from a primary site tumor, which is elsewhere and discontinuous from the esophagus. Malignancies of pharynx or gastric cardia can spread via the lymphatics. Hematogenous metastases are usually from the thyroid and the lung, which serves as the sources for primary lesion. Histopathologically, submucosal location without invasion into the mucosa is characteristic feature for metastasis. The presence of metastasis in the esophagus is indicative of poor prognosis.15

The incidence of esophageal malignancy has shown an upward trend in the recent years. With increased exposure to risk factors such as alcohol consumption, smoking, HPV infection, GERD, intake of hot tea, salted foods, and red chillies contribute to the rise of the incidence of the esophageal carcinoma. A thorough knowledge on the morphology of the lesions possible in esophagus along with the utility of special stains and IHC helps in providing an accurate diagnosis, which ultimately decides the treatment and prognosis of the patient.